During their 3 1/2 years of touring, Rhoades and band received critical acclaim from Rolling Stone, Playboy, Village Voice and too many other magazines to list. In a review of an appearance in New York, Rolling Stone/MTV critic Kurt Loder proclaimed Rhoades "one of the most savagely 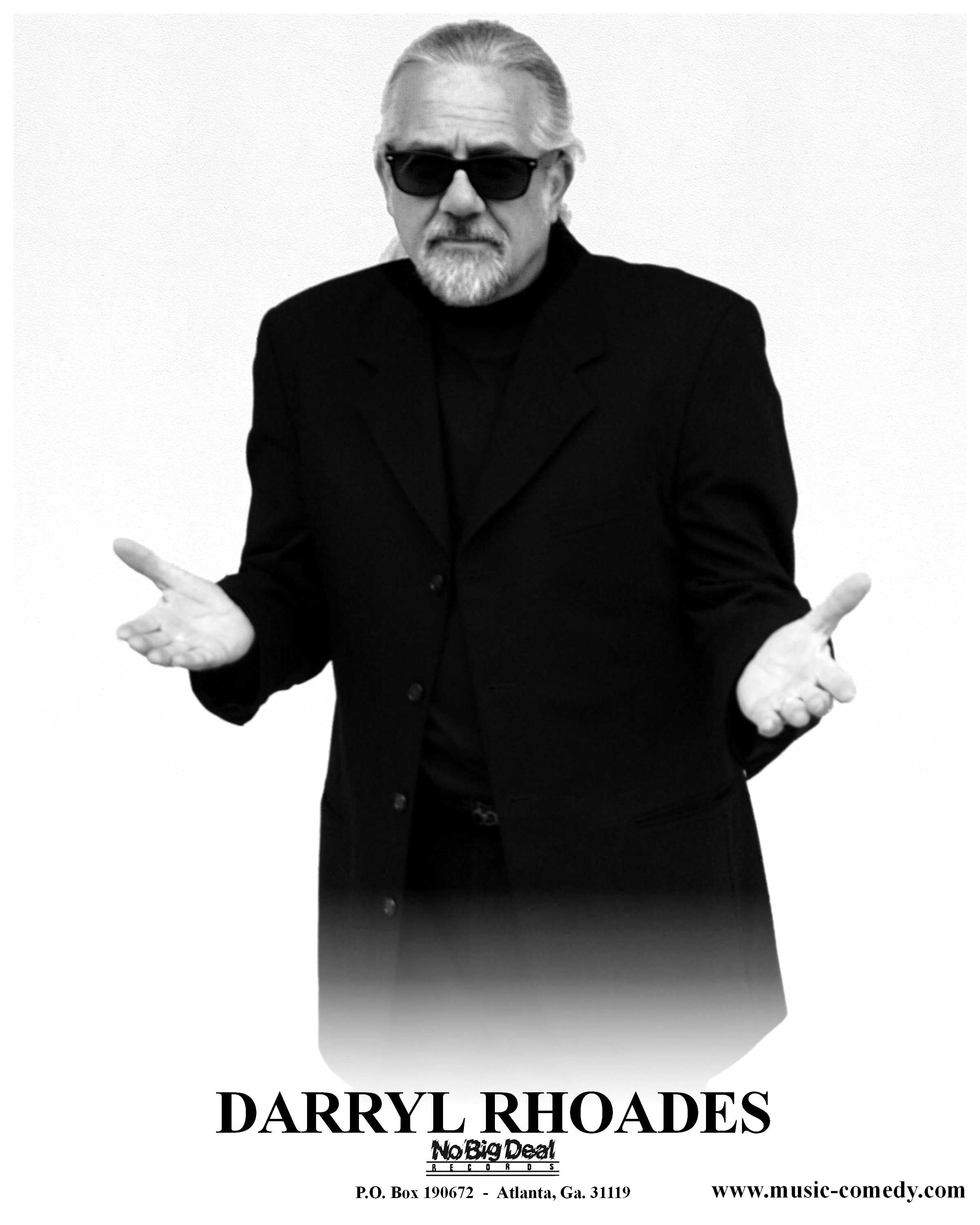 gifted writer/performers in the country today". Take a look back at their 1976 New Years Show and check out Darryl's Grand entrance. Their show and material was constantly and favorably compared to Zappa, The Fugs, The Tubes and others. They performed a two week stint at The Other End (now called the Bitter End) which were attended nightly by rock luminaries such as Robert Palmer, Phoebe Snow, Leon Redbone, etc. Rhoades knew good things were ahead when Phoebe Snow stated that it was one of the most disgusting shows she'd ever witnessed while he had spit hamburger buns on simply irresistible Robert Palmer. When word of the incident spread many more artists were drawn such as members of Kiss, Martin Mull, and Iggy Pop who sat in with the group.

On New Year's Eve 1977 Darryl and band appeared on the nationally syndicated "James Browns' Future Shock" on WTBS where they paid tribute to Brown by spoofing him and parodying his "hardest working man in show business" routine. Rhoades performed his new dance "Suicide".

In Jan. 1978 Rhoades did a guest set with the act that opened for the Sex Pistols American debut where overtly satirized the punk movement in general and the Sex Pistols specifically by performing a song with a four foot safety pin seemingly running through his body. The early versions of the Pistols documentary tour (DOA) contains portions of that performance.

During the existence of the band several songs were recorded but only one record was released...."BURGERS FROM HEAVEN/SURFIN' SHARK", a very rare 45 RPM.

In 1979 The Outlaws covered Rhoades' "The Lights Are On (But Nobody's Home). In 1980 Rhoades released his first LP, "BURGERS FROM HEAVEN" which was critically acclaimed while he only did limited promotional appearances.

From 1981 to 84 Rhoades' whereabouts were sketchy, unconfirmed reports of moving to California and romantic involvement with actress Margo Kidder, retreating to India with the Maharishi Yogi becoming disillusioned and turning to professional wrestling, and moving to England to found the new romantic-techno pop group "A FLOCK OF HAIRCUTS" surfaced. To this day he will not deny or confirm any of these reports.

In 1985 he assembled his new group "THE MEN FROM GLAD" and released his 2nd LP "BETTER DEAD THAN MELLOW". The group toured non stop from '85 to '88 and recorded another album, "NO GLOVE/NO LOVE" "NO GLOVE" was acclaimed as being Rhoades' most rockin' recording to date. The group however, was disbanded that year.

Also, in 1988, the song "BURGERS FROM HEAVEN" was used in the Jim Varney movie release "FASTFOOD".

In 1991 he released a compilation of his first three albums called "BEFORE AND AFTER HIS TIME". In 1992 he released his 5th album, "COWPOKIN' & UDDER LOVE SONGS" which started getting a good bit of airplay across the country with titles such as "I HATE EVERY BONE IN YOUR BODY BUT MINE", "MY BLOW UP DOLLS' DONE GONE DOWN ON ME" & "THINK OF ME (When You're Under Him).

Working non stop and receiving airplay from syndicated radio shows such as THE DR. DEMENTO SHOW & THE JOHN BOY & BILLY BIG SHOW has helped to create a large following and leaving little time for Rhoades to perform with musical groups. He performs on rare occasions as the drummer for THE ELECTRIFYIN' SISSIES which include record producer BRENDAN O'BRIEN, RICK RICHARDS from the GEORGIA SATELLITES, and radio personality/rock historian REX PATTON.

In 1994 he released his 6th LP, "THE LEAN YEARS 1950 -1994". The album received even more airplay with his infamous 'U SUCK BEER" commercials which have become his trademark in his standup.

In April, 1999 he released his most intricate' work to date, his 7th LP titled "RADIO DAZE....THE SHROUD OF TOURIN". Aptly titled because it was written while touring in his car. This CD is a parody of radio Deejays from all over the U.S. and close to forty different performers with biting satire of bad gospel music, commercials, and unfunny morning radio shows.

In May of 2001 Darryl released his 8th comedy & music recording entitled "RHOADES....ALL OVER THE MAP". The CD was aptly titled as it contained various musical styles such as jazz, country, swing, heavy metal, rockabilly and more. Also, on this CD are versions of a couple of his songs recorded live in a rare radio interview and recorded live standup from the Punchline in Atlanta.

This email address is being protected from spambots. You need JavaScript enabled to view it.